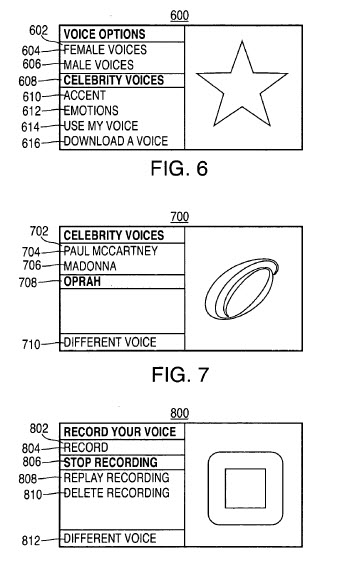 This patent describes the ways to alter the voice output from the iPhone, such as the playback of audio files. Most would think this would be used for reading text from an eBook, but the patent suggests that it would be for audio and not text.

Despite the restrictions involved in playing back audio files, users of media devices may wish to change the audio output of audio files. A mother, for example, might wish to change the narrator’s voice in a pre-recorded, commercially available audiobook to her own voice, so that her child can listen to the audiobook as narrated in the mother’s voice in her absence. In another scenario, a student listening to a lecture as a podcast file might want to change the audio of certain sections of the lecture to sound like someone else’s voice, so as to emphasize important parts of the lecture.