Apple released the iPhone OS & SDK 3.1 Beta yesterday. Here’s a list of what people have found to be changed so far:

– MMS is now enabled by default (Still not supported by AT&T).
– A “Fraud Protection” toggle is now available in Safari settings.
– Voice Control over Bluetooth is now available, allowing users to Initiate calls and control music playback via Bluetooth headsets.
– iPhone startup and shutdown and app launching times have improved.
– Trimming video clips on the iPhone 3GS now offers the ability to save the edited version as a copy rather than simply overwriting the original file.
– New APIs allow developers of third-party application to access and edit videos.
– iPhone vibrates when rearranging Home screen icons.
– OpenGL and Quartz have seen improvements.

The official iPhone UK carrier O2, have been reported that they are to be the official carriers for the Palm Pre. O2 has always

had a strong smartphone market in the UK and with the iPhone and Pre being sold in the same store it will make things a little more interesting.

It seems this will be true as the O2 owner Telefonica, reportedly secured global rights to the Pre back in March.

Apple today, released the 3.1 beta for the iPhone firmware and SDK; both the SDK and the firmware are available for

testing and development to paid members of the iPhone developer program. Although this is pre-release software and details should remain under NDA, some details will leak out soon.

Some wonder why Apple have released the 3.1 Beta so close to the release of 3.0 to the public. Some think that it’s not just bug fixes, as Apple would probably release it as 3.0.1 if so. Apple may have worked out the exploit in which the Dev-Team use to jailbrake devices and patched it in this new release, so upgrading is to be taken at your own risk and may stop you from jailbraking until the Dev-Team work it out. 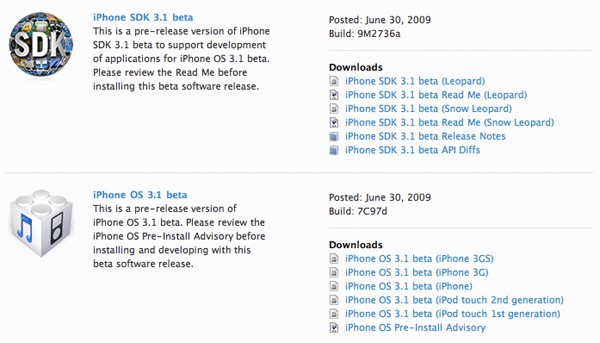