The iPhone Dev-Team has just released there latest jailbreaking tool, PwnageTool for iPhone OS 3.1. At the minute the

jailbreak is for Mac only but hopefully a Windows version will be released soon.

This release starts with PwnageTool 3.1 for Mac OS X – this application supports the iPhone 1st Generation (2G), the iPhone 3G and the iPod touch 1G. NB: THIS DOES NOT SUPPORT THE 3GS OR 2G/3G IPOD TOUCH. redsn0w for Mac OS X and Windows will follow sometime in the near future, please don’t bug us about it – we’ll release when we have something ready.

Due to the recent 3.1 iPhone OS update, the iPhone 3G and iPod Touch are now able to edit video just like the iPhone

3GS. Both devices still can’t record video, unless jailbroken, so this may not come as a big tool for most people.

To get it to work, first you must get someone to email you a video file. Once you have it, you can open the email and select the arrow on the lower menu bar. This will give you five options: Reply, Reply All, Forward, Save Video and Cancel. Once you select Save Video, the video will get saved to your Camera Roll.

Go to the Camera Roll and select the video, you are then able to watch the video and edit it. To edit a video, tap on the timeline at the top of the page, you can then drag your finger to the start and end points on the video. When you select trim, you then have the option to trim the original video or save the trimmed potion as a new clip.

In the latest version of the iPhone OS 3.1 beta, which was seeded to developers last week, it contains an

The iProd1,1 device has been assigned a new productID of 4762 (versus 4757 of iProd0,1) and assigned a different ConfigurationDescriptor of “standardMuxPTPEthernet.” iPhone models also have this designation, and the additional interface identified in the plist for this configuration is “AppleUSBEthernet.” The consensus on the internet seems to be that the new device might have gained high-speed networking capabilities; though the iPhone uses the interface to tether to a laptop to share its 3G connection.

The original “iProd0,1” suggested that the device was a prototype, but the new addition of a “1,1” version of the device implies that it may now be approaching a public release.

Could this be the Apple Tablet that has been rumored so much recently?

Apple has released iPhone OS 3.1 Beta 3 (build 7C116a) and the iPhone SDK 3.1 Beta 3 (build 9M2808) to developers. So far there are no interesting developments that have been found, though it is suspected that Apple might be implementing tools for use in Augmented Reality applications that require the ability to overlay real-time downloaded data on top of live video.

The new features include:
• Copy and paste videos. There is a 15 MB limit for copying/pasting videos or images.
• Tethering Counter – If you go to Settings -> Genral -> Usage on your iPhone, you’ll notice Tethering data which shows how much tethering you’ve used.
• Springboard Icons – When you hold down the Springboard icons they no longer vibrate.
• Baseband Updated – The baseband has been updated to 05.11.04.
• Camera API Additions.

Yesterday Apple provided iPhone developers with Beta 2 of the OS 3.1 firwamre. This release didn’t mention any changes, although the first beta included minor feature adjustments without Apples mentioning. Beta 2 will most likely contain bug fixes which address issues in Beta 1. Along with this a updated version of the iPhone SDK for both Leopard and Snow Leopard have been also released. 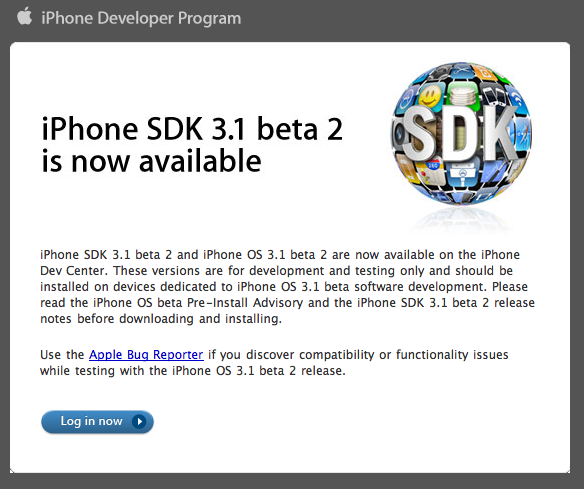 If your using Beta 2 and notice any changes feel free to leave a comment.

Update: I’ve just found that beta 2 also introduces a public API for manipulating live video. Developers are still testing the capabilities but it could open the door for many interesting apps in the near future.

With the vast collection of new features from the new iPhone OS 3.0, also came the vast amount of problems it’

As a 3.0 user myself I have been affected by some of these, such as the WiFi connectivity issues which have caused hundreds of users problems.
The battery life using 3.0, for some has dropped drastically and I have myself seen a bit of a drop in the batteries performance.
Destructive video editing on the iPhone 3GS. which Apple has fixed in 3.1. Also some unknown problem with 3.0 which causes the device to over heat and the battery to drop drastically as I experienced whilst using Qik to live stream a video.

These are just a few problems that 3.0 users are having and Apple really needs to sort these out, as a lot of people rely on there iPhone to last throughout the day, we don’t want it to be like the Palm Pre do we. Hopefully these will be fixed in 3.1 and anyone using the 3.1 Beta feel free to drop a comment on if any of these problems, or others, have been fixed or even maybe caused by that update.

problems recently. Most believe it’s down to the software, the 3.0 firmware that Apple released a few weeks ago as it only seems now that users are having these problems.

Apple blame the overheating on the hot weather and are blaming people for leaving there iPhone’s in hot places but the battery issues must be in some way connected to the new firmware as I experienced today.

My iPhone 3G which used to run 2.2.1 would run under moderate use each day without getting into the 20% battery area, with heavy usage it would get down quicker and I would have to charge. But today whilst at a friends house I decided to do some live streaming using Qik, however after about 10 minutes I noticed that my iPhone had heated up considerably and the battery had lost maybe 30/40% of it’s charge. Now I know for a fact this isn’t usual as I’ve used Qik before and the phone didn’t have the same problems using 2.2.1.

It seems that there must be something not quite right with the 3.0 firmware which is causing maybe the CPU to be overused, causing the phone to heat up or something in some setting which isn’t coded properly and causing these problems.

I’d be interested to try out the 3.1 Beta to see if it had the same issues, however I’m not currently a developer so can’t try it but if anyone has tried it leave a comment about if you experience the same issues.

The Dev-Team have released there official jailbreak tool for all 3.0+ iDevices today and it’s compatible with the iPhone

He also released the RC2 of both versions, these add some more payload stability improvements. If you have RC2 installed, you don’t need to use RC2a.