Dev-Team Confirm No Need For New Jailbreak Tools For 3.0.1

They released this information:

The 3.0.1 release is a “branch” from 3.0 that occurs (code-wise) before all the 3.1 betas. The programs redsn0w needs to change for the jailbreak are identical when you compare the 3.0 and 3.0.1 versions. It seems pretty much the only changes Apple made were for the SMS bug, which affects programs that redsn0w doesn’t touch. That’s why you can re-use redsn0w 0.8 on 3.0.1 even though it was written for 3.0.

And since 3.0.1 doesn’t touch the baseband either, ultrasn0w 0.9 works for those needing the soft unlock. Just install it from the repo666.ultrasn0w.com repository using Cydia as usual.

We’ll at some point fix redsn0w to recognize both 3.0 and 3.0.1 IPSW’s, but really that’s the only change that would be made to it. Everything else would be identical, so there’s no need to wait for the “proper” version that recognizes the 3.0.1 IPSW as valid.

So to jailbreak the new firmware just use the old tools and you should have no problems.

There hasn’t been many changes in the latest firmware release that have been found other than the SMS fix, feel free to email them in if you find any.

If you want to jailbreak your device it has been reported that in most cases it works fine but maybe wait a while until everything gets checked out.

Apple has released iPhone OS 3.1 Beta 3 (build 7C116a) and the iPhone SDK 3.1 Beta 3 (build 9M2808) to developers. So far there are no interesting developments that have been found, though it is suspected that Apple might be implementing tools for use in Augmented Reality applications that require the ability to overlay real-time downloaded data on top of live video. 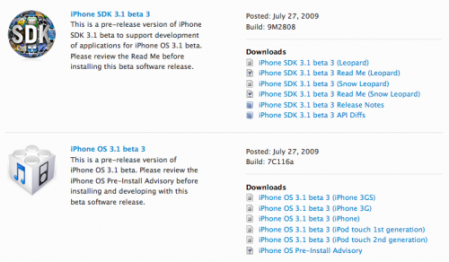 The new features include:
• Copy and paste videos. There is a 15 MB limit for copying/pasting videos or images.
• Tethering Counter – If you go to Settings -> Genral -> Usage on your iPhone, you’ll notice Tethering data which shows how much tethering you’ve used.
• Springboard Icons – When you hold down the Springboard icons they no longer vibrate.
• Baseband Updated – The baseband has been updated to 05.11.04.
• Camera API Additions.

Push Notifications Being Sent To The Wrong iPhone

sent to them, but Apple’s push notification system sent it to the wrong people. However it’s not Apple’s fault as some believed it to be.

The iPhone generates unique private/public keys upon activation that identity each handset, so that they correct messages can be sent to the correct device. However using unlocking tools breaks this as they use duplicated keys to facilitate illicit use. Now that single identifiers have been registered to multiple phones instant messages, messages can be sent to any of those devices.

iPhone OS 3.1 Beta 2. It’s not a surprise that Apple would fix this as not all carries have sorted out price plans for tethering.

If your still on iPhone OS 3.0 and don’t upgrade to 3.1 when it is officially released then the loophole will still be there and you can still use it at your own risk as if your carrier releases your using tethering without paying for it then can charge you at full data rates.

Yesterday Apple provided iPhone developers with Beta 2 of the OS 3.1 firwamre. This release didn’t mention any changes, although the first beta included minor feature adjustments without Apples mentioning. Beta 2 will most likely contain bug fixes which address issues in Beta 1. Along with this a updated version of the iPhone SDK for both Leopard and Snow Leopard have been also released. 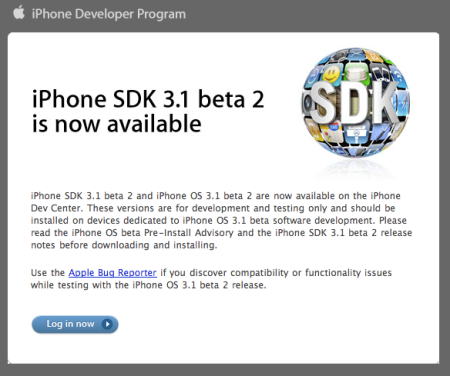 If your using Beta 2 and notice any changes feel free to leave a comment.

Update: I’ve just found that beta 2 also introduces a public API for manipulating live video. Developers are still testing the capabilities but it could open the door for many interesting apps in the near future.

Why Apple Need To Fix 3.0 Soon

With the vast collection of new features from the new iPhone OS 3.0, also came the vast amount of problems it’

As a 3.0 user myself I have been affected by some of these, such as the WiFi connectivity issues which have caused hundreds of users problems.
The battery life using 3.0, for some has dropped drastically and I have myself seen a bit of a drop in the batteries performance.
Destructive video editing on the iPhone 3GS. which Apple has fixed in 3.1. Also some unknown problem with 3.0 which causes the device to over heat and the battery to drop drastically as I experienced whilst using Qik to live stream a video.

These are just a few problems that 3.0 users are having and Apple really needs to sort these out, as a lot of people rely on there iPhone to last throughout the day, we don’t want it to be like the Palm Pre do we. Hopefully these will be fixed in 3.1 and anyone using the 3.1 Beta feel free to drop a comment on if any of these problems, or others, have been fixed or even maybe caused by that update.

I for one have experienced connectivity problems with my iPhone 3G over WiFi. My signal is never as strong as it used

to be and even in the house I get no connection where I used to get a connection, all this after the 3.0 update.

Hundreds of people have been complaining of these issues of the iDevice not connecting to WiFi, less signal strength or saying you have a WiFi connection when you don’t.

Apple if fully aware of the problem and will be working to fix it. Some people think that the 3.1 update will fix these issues but some people don’t agree with this so we will have to see. If anyone is using 3.1 Beta do you experience any of the WiFi problems?

Some people have came up with many solutions to try and fix this problem, but they don’t work, some people even tried putting there iDevice in the freezer.

For all you out there who think it’s unfair that iPod Touch users have to pay $10/£5.99 for an upgrade which iPhone users

get for free and the only reason Apple charge is to do with accounting, I’m offering you a free upgrade to 3.0. Just download the restore file from the link below and press Ctrl and Restore and choose the downloaded file.
I hold no responsibility for the file and you use it at your own risk, enjoy 3.0!